THE PROMPT
To conduct a data exploration on the World Bank's Development Indicators, and then create an interactive dashboard and/or storyboard visualization using the analysis gleaned from our previous data exploration.​​​​​​​
DATA EXPLORATION & ANALYSIS
The World Bank's Development Indicators dataset consists of 1,600 indicators that measure the range of development in areas such as economic policy & debt, trade, education, environment, gender, health, infrastructure, poverty, etc. The full dataset contains data for each of those 1,600 indicators for all countries worldwide, including aggregates for geographic regions, and for over six decades (1960-2020). Thus, this dataset was incredibly intimidating and by far the largest dataset I had every worked with for visualizations. As a result, I found the data exploration stage very challenging. I began by downloading extracts of the data with indicators that I found interesting and I felt could lead to insightful analysis & conclusions.
In my data exploration process, I explored these 3 indicators: urban population growth,  industry annual growth, and renewable energy consumption. I chose these indicators because I hypothesized that there would be a positive correlation between urban population growth and manufacturing & industries growth, as well as renewable energy growth. I hypothesized that as the global population becomes increasingly urban, rise of urbanization in countries will be in parallel to economic growth (implied through the industry/manufacturing growth indicators). I also wondered whether renewable energy use and sustainability would increase or decrease and economic activity & urbanization grew. 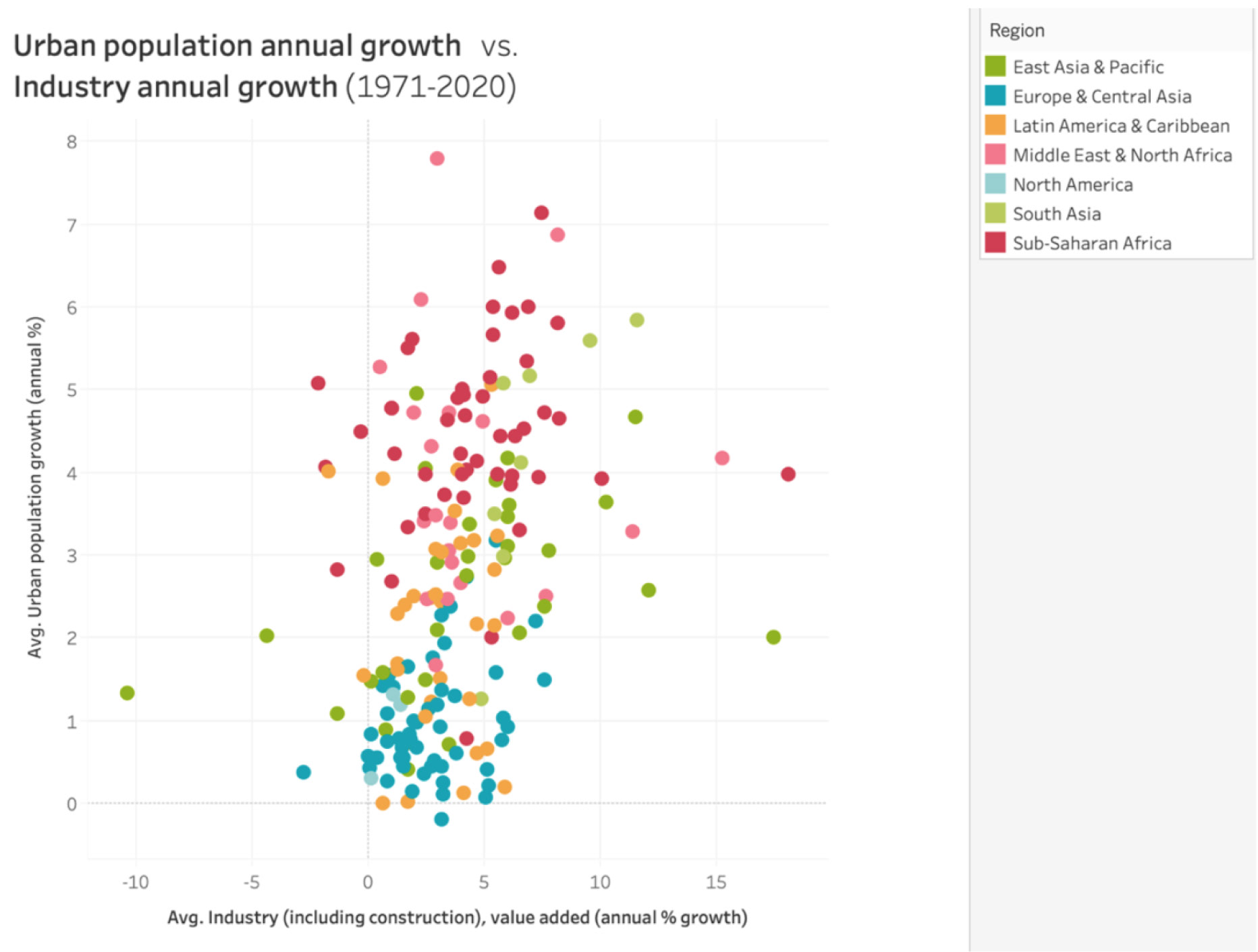 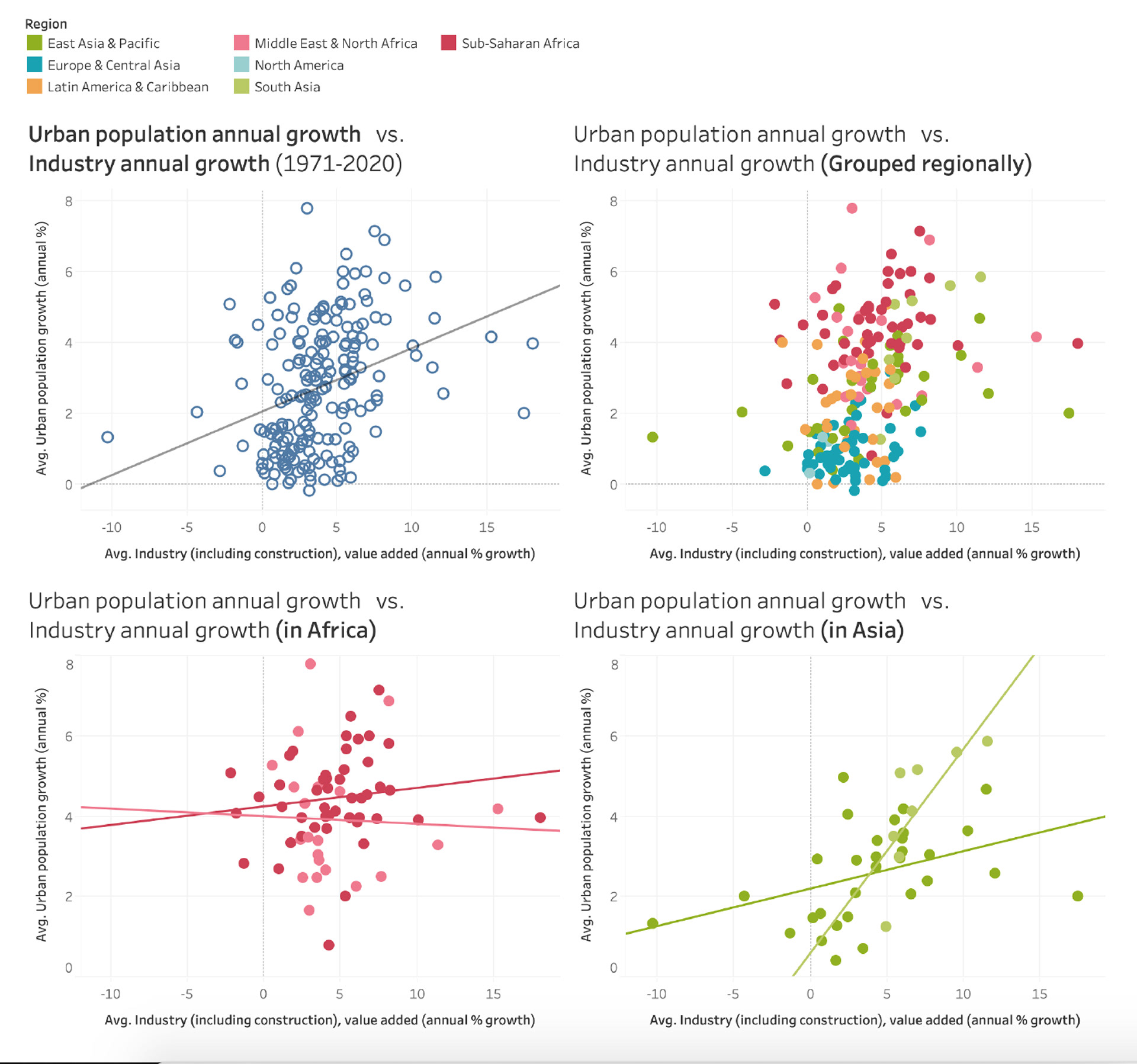 The images shown above are the various iterations to visualizations I made in Tableau that explore how urban population growth and industry annual growth is related. I downloaded the aggregated data for each region as provided by the original World Bank dataset, and create datasets allowed the viewer to easily see trends between regions. However, I felt that the full visualization with all regions had too much outliers and I wasn't sure if it provided a strong enough positive correlation. Furthermore, because the trendlines were so different between regions, I decided there wasn't a strong conclusion I could highlight for the final visualization. 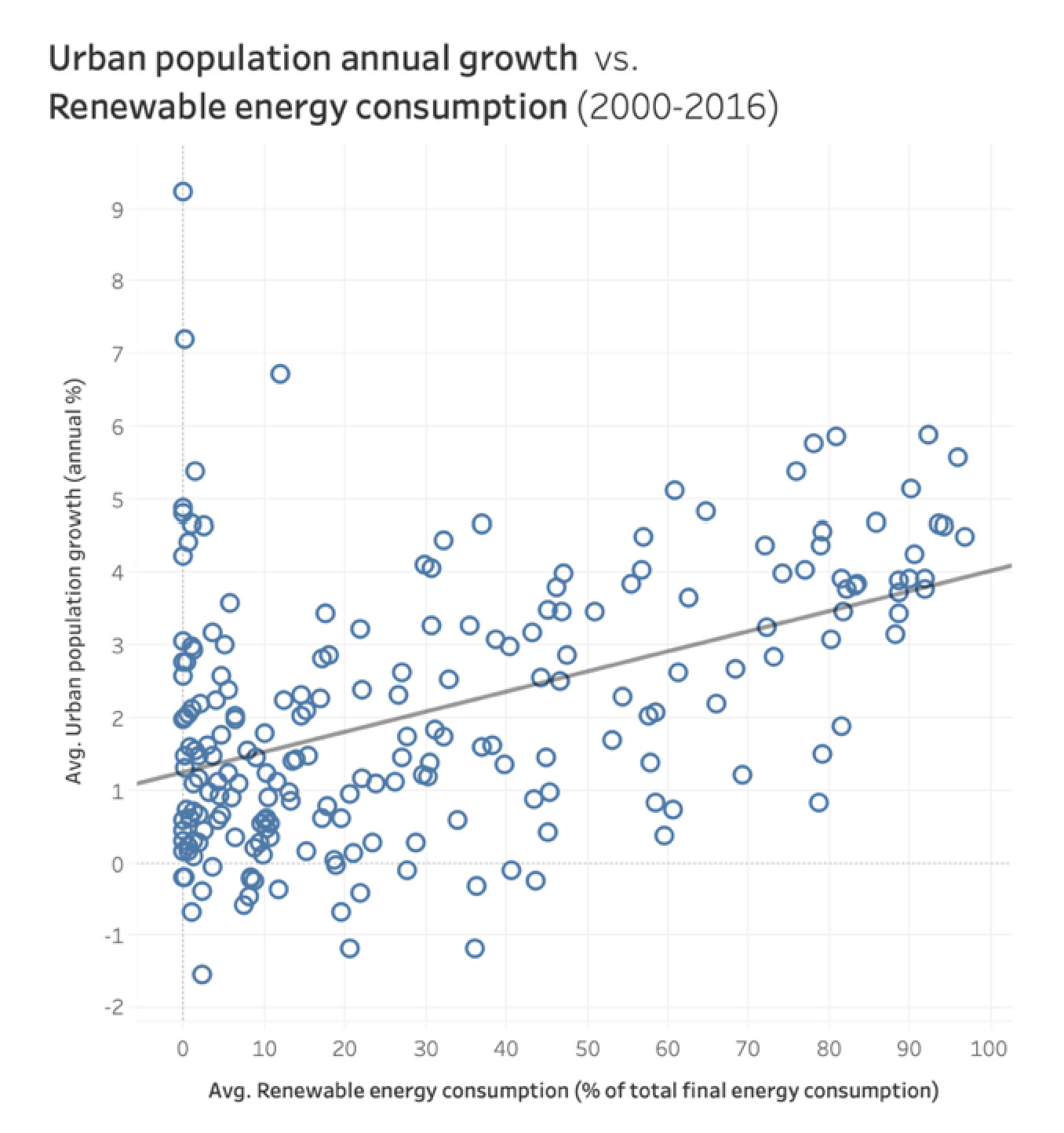 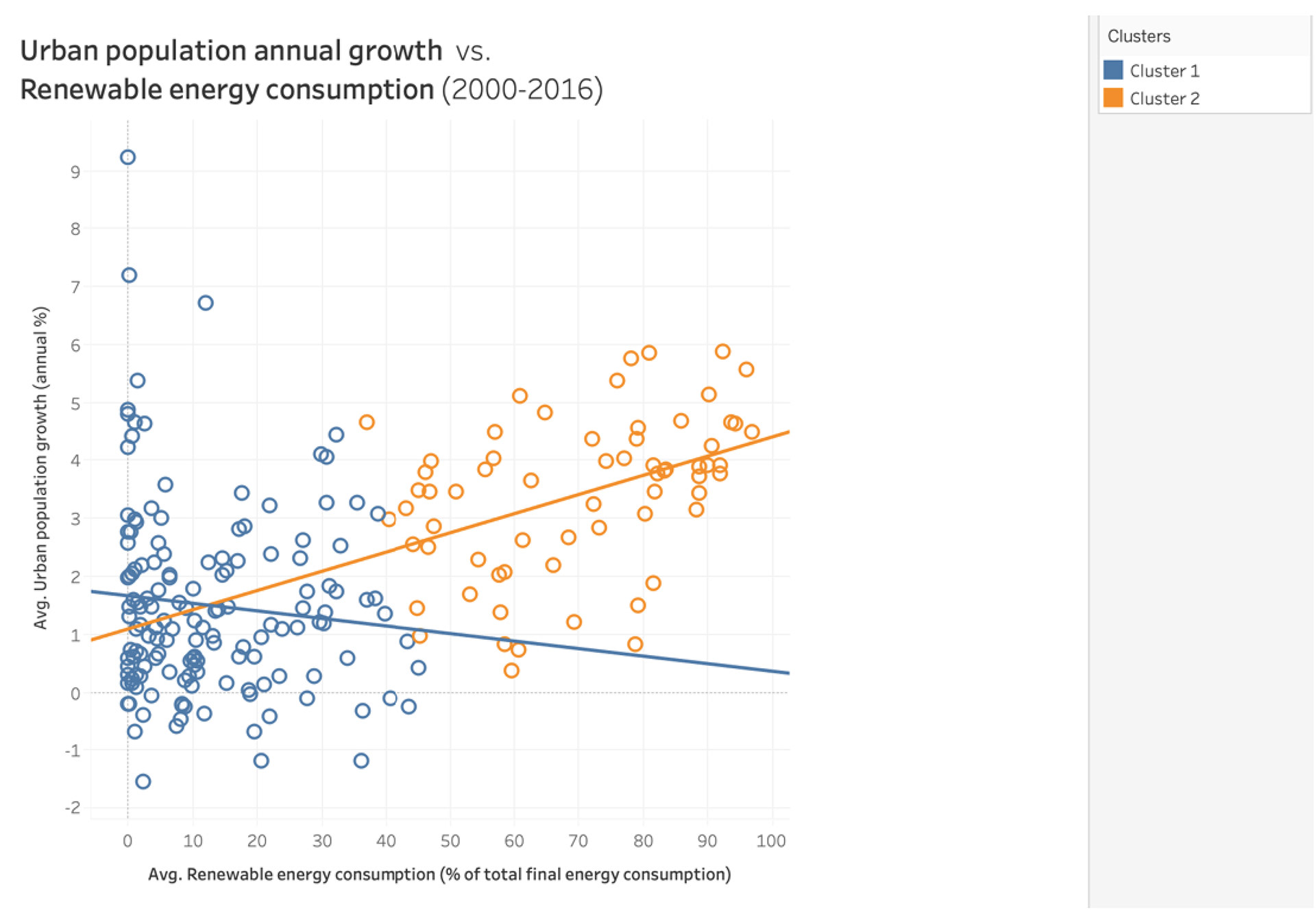 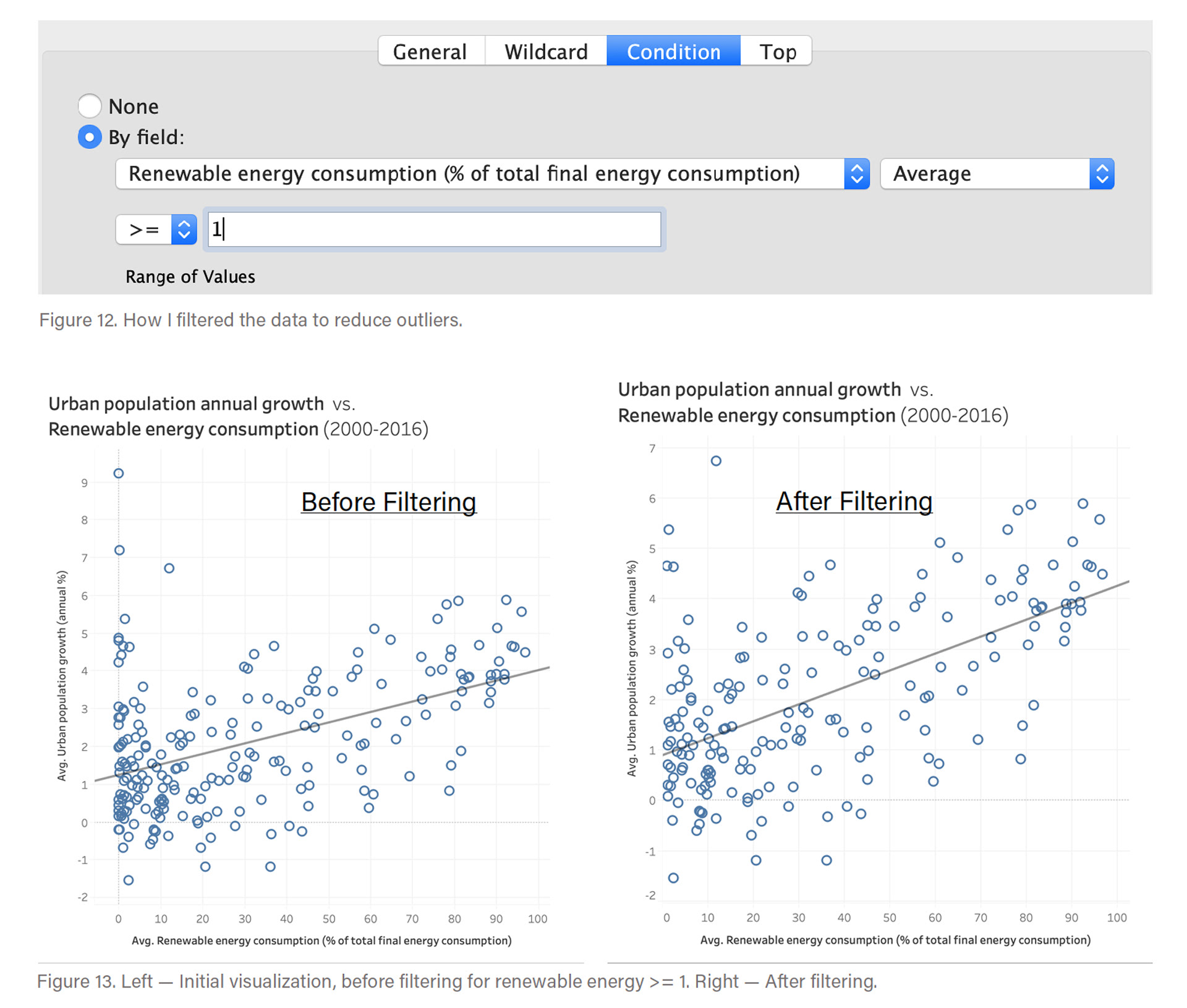 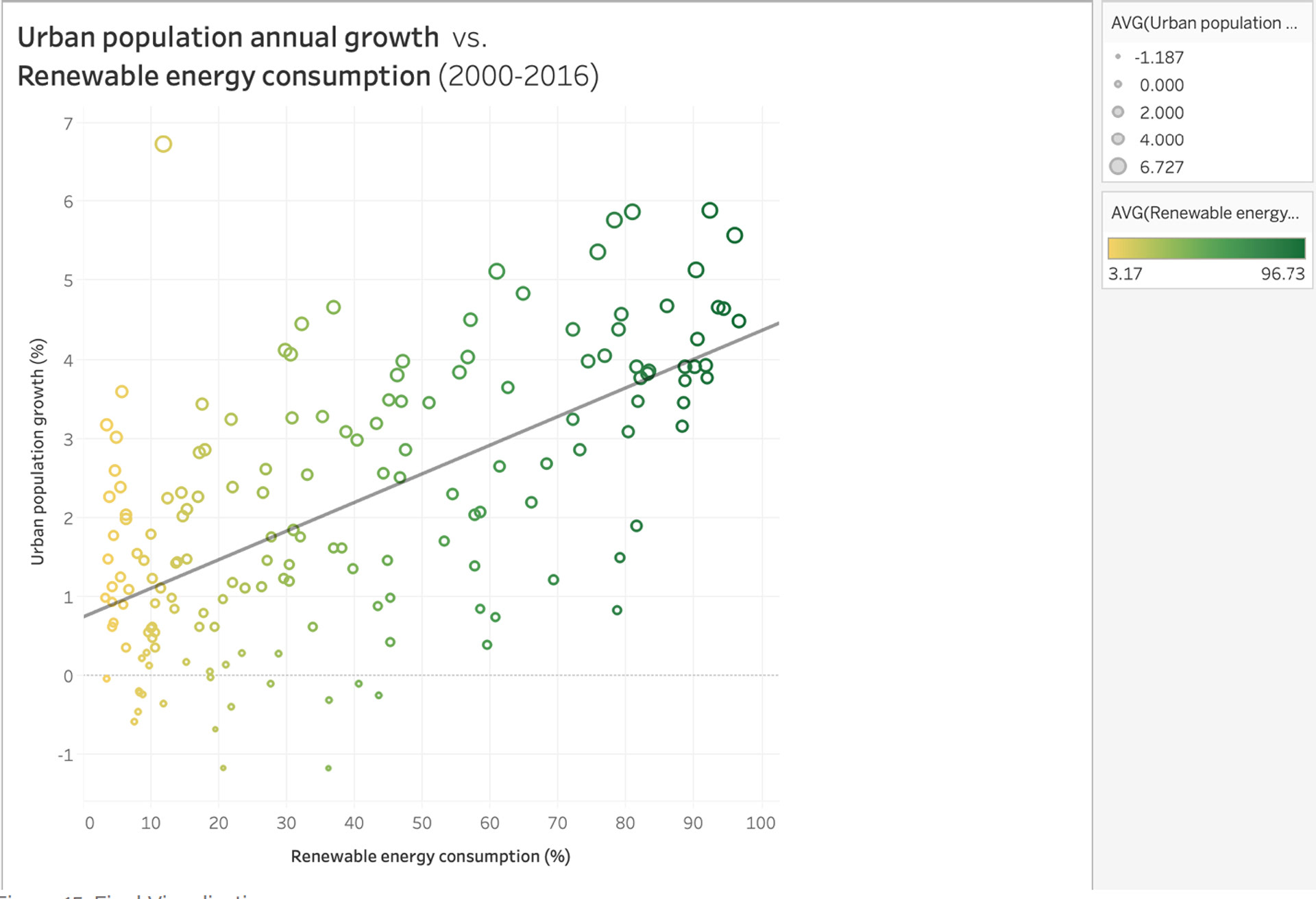 02
The second part of the dashboard looks into regional trends, outliers, and compares countries (namely, USA vs. China). Saudi Arabia represents the Middle Eastern region which on average has lower renewable energy consumption (note its y axis). Whilst Ethiopia represents the Sub-Saharan African region which on average has higher renewable energy consumption.