The system lives in the home of the PLWD, and consists of a Radio-Frequency Identification (RFID) sticker, an Apple Watch, and a mobile app.​​​​​​​

RESEARCH
What is the problem space like for Alzheimer's + Dementia?
Dementia and its many forms (Alzheimer’s is the most common) is an incurable disease that affects the PLWD (person living with Dementia) and their loved ones in the long term. It has many stages with different treatments (pre-diagnosis, early, middle, late stage, then death), and it destroys one’s sense of self, memory, cognition, and, eventually, the ability to carry out the simplest tasks.
Secondary Research
We read and watched as much as we could in order to better understand the Dementia user journey.

Primary Research​​​​​​​
We conducted interviews to get a better understanding of the personal experience and day-to-day details of living with dementia and/or caring for someone with the disease, and to get professionals’ perspective on the design space and already existing design solutions.​​​​​​​

NARROWING DOWN + IDEATION
How did we get to MEMO?
Based on what we found through our research and feedback we got, we decided to narrow down to mainly focus on solutions that:

➞ Design for the home space rather than outside, because PLWD don’t go out much.

➞ Focus on practicality & assistive solutions, rather than more abstract and harder to measure aspects of Dementia — such as improving PLWD’s sense of self or past personality.

➞ Reduce the work load & strain on caregivers who may be busy or stressed.
From this, we formed out 'how might we' statement which encompasses what we seek to achieve through our final design solution.
How might we build a system to support communication between people living with dementia and their caregivers to improve the quality of their daily life?

Other concept explorations
These are some of the other concept ideas we thought of pursuing, and/or merged and adapted to form MEMO.
STORYBOARD

VIDEO ANIMATION​​​​​​​
We decided to create a short animation to explain how MEMO would be used day-to-day, and how it would live the PLWD’s & caregiver’s home environment and routines. The animation is meant to focus on the narrative rather than the interface or how MEMO works.
Why an animation?
Our main reason for choosing to create an animation video rather than a high fidelity prototype video was because many in our team wanted to try animating and practice that skill. Furthermore, since MEMO and it's use case is about Dementia and can be deeply personal, we felt that we could better portray MEMO's use case through a story animation rather than a functional prototype video.
How did we create it?
Our animation was created using Figma, Procreate, and stitched together in Adobe Premiere. The animation is based on the storyboard, and includes use case 1 and 3. We started out by creating a script for each scene and use case, and then roughly drew out the storyboard frames for it all. We then looked at art styles and the kind of mood we wanted to convey, yet was still possible through our limited time, skill, and resources. For the animation, I designed (drew), and colored some background environment frames, and colored some of the character frames. I also contributed in script and stitching together the frames. 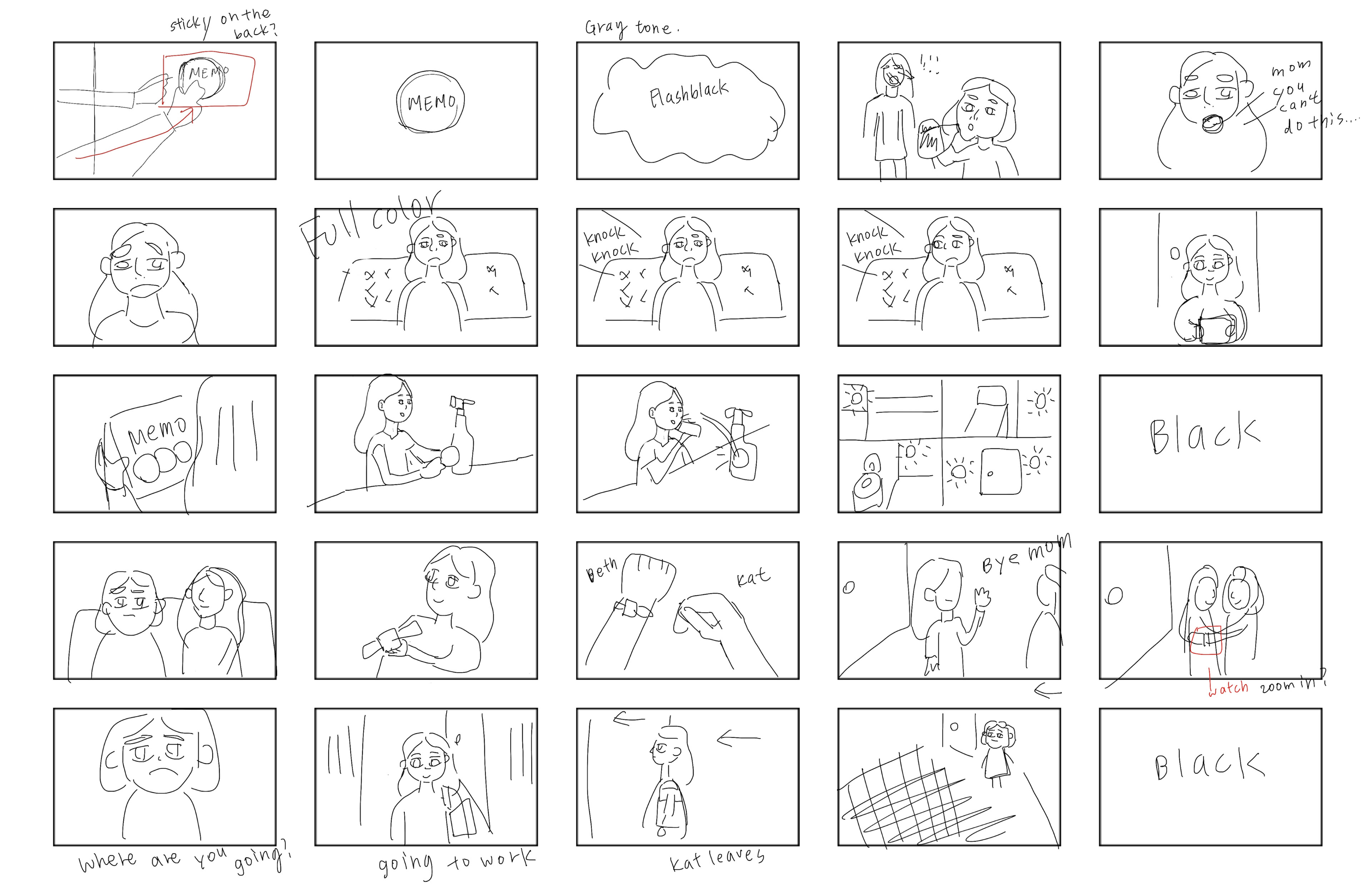 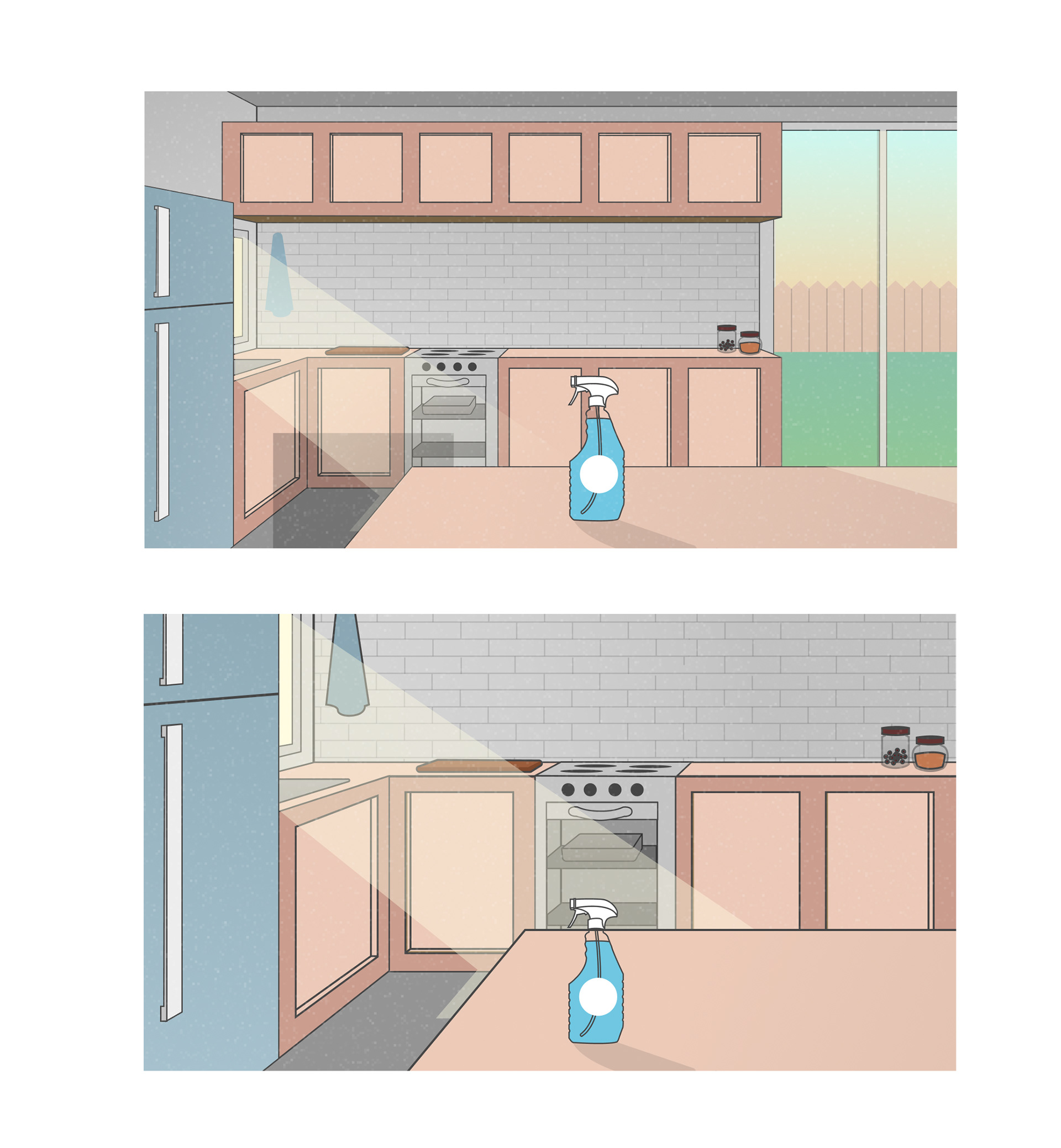 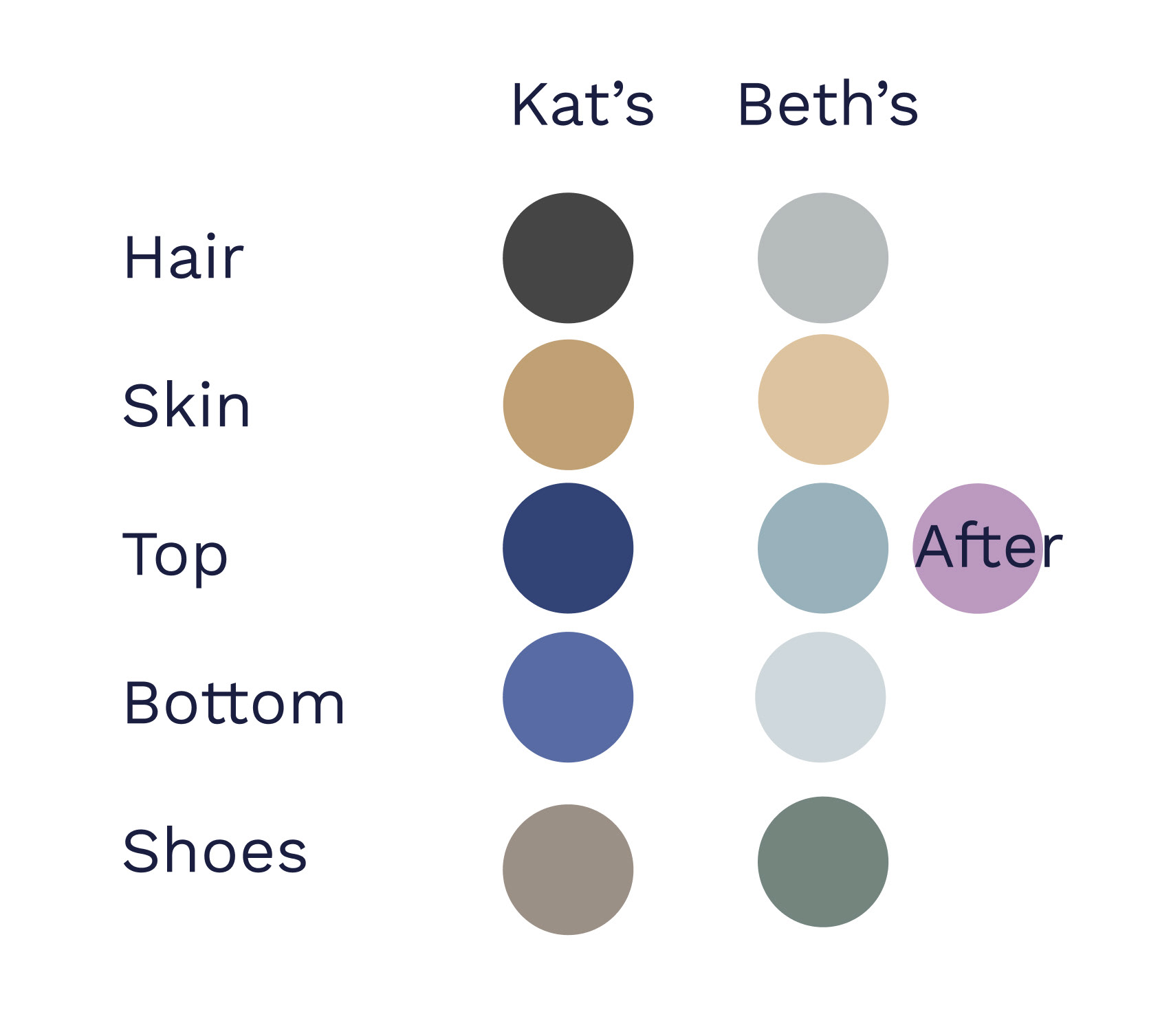 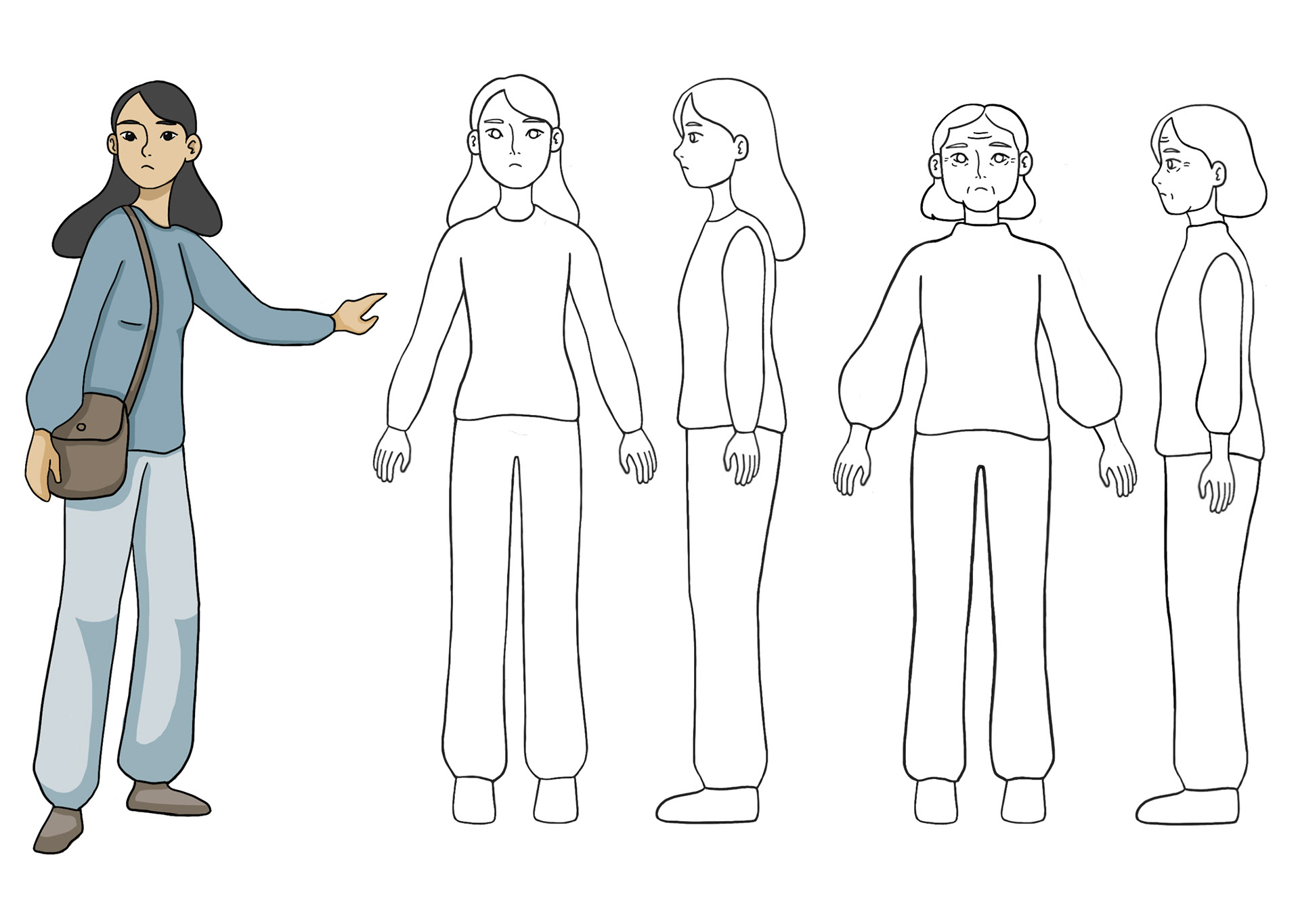 STICKERS
Are attached to items and locations where the PLWD may need reminders for tasks, or warnings for safety.

• Works as a visual indicator for warnings and daily task reminders for the PLWD.

• Works as physical tracker (using precise indoor location through the RFID tag), and connects with the watch to trigger a warning or message from the caretaker to the PLWD. 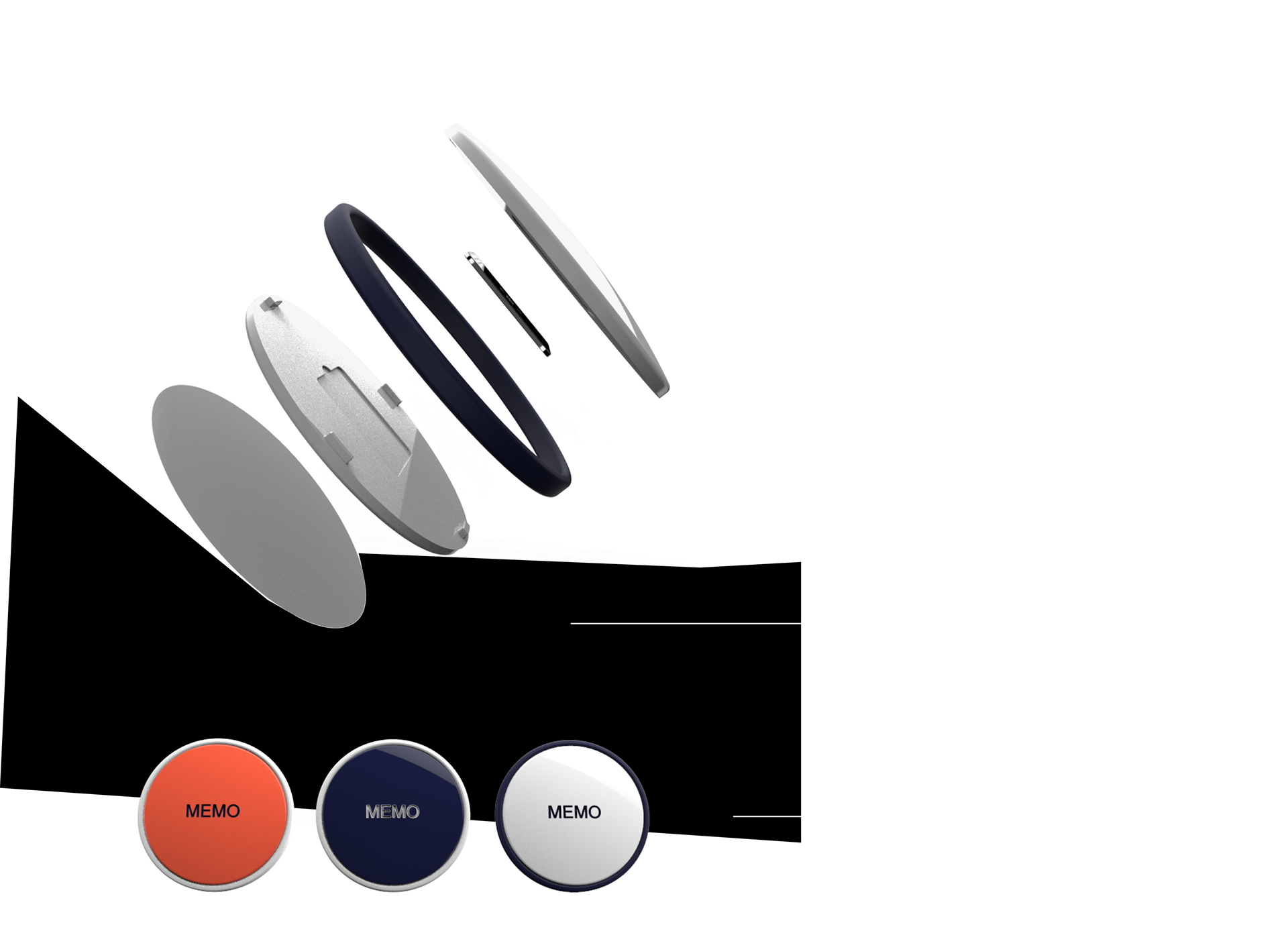 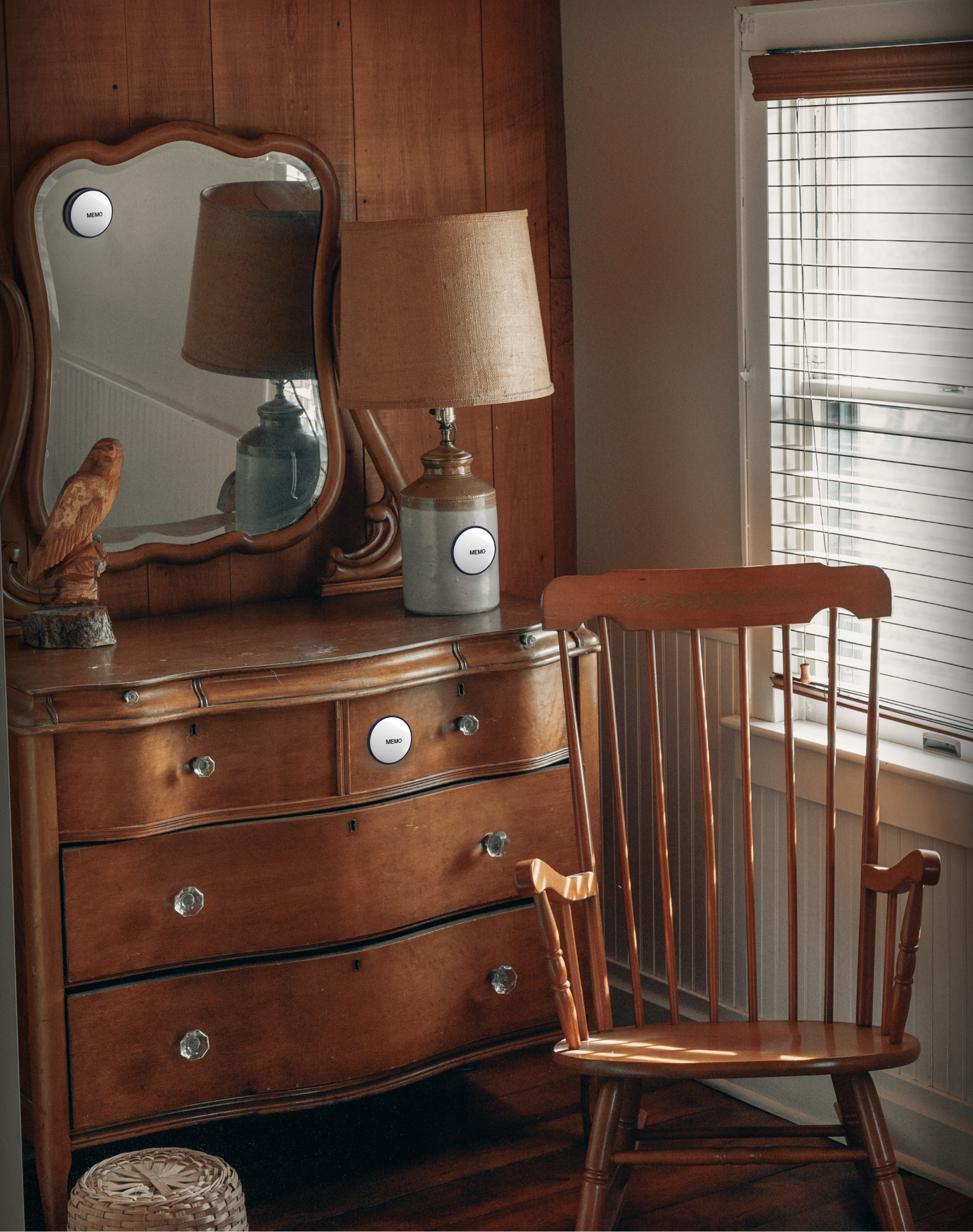 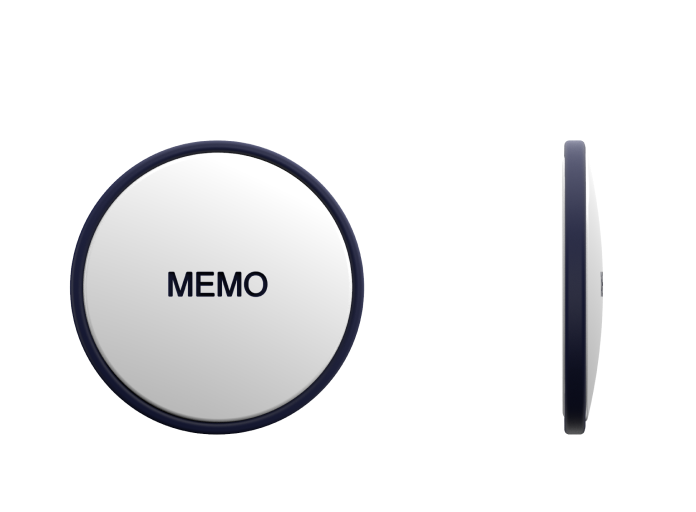 • Works as a physical tracker of where the patient is relative to the stickers — using precise indoor location tracking, and connecting with the sticker to trigger warnings or messages.

• Works to detect what activities the PLWD is doing relative to MEMO’s reminders/warnings; if they are safe, or if they have completed their task.
Here is an example scenario of how the Apple Watch's messages and alerts connects to the stickers placed in the PLWD's home.
The caretaker sets up a sticker and reminder for the PLWD to eat breakfast later in the day. When the PLWD goes to the kitchen, the watch they are wearing connects with the sticker in the kitchen and triggers the reminder message to eat breakfast. The watch then detects if the PLWD has completed the task or not. 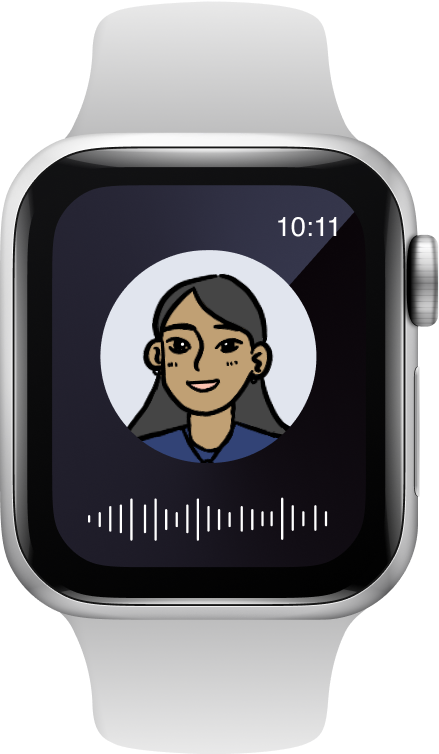 Receiving a voice message from the caretaker. 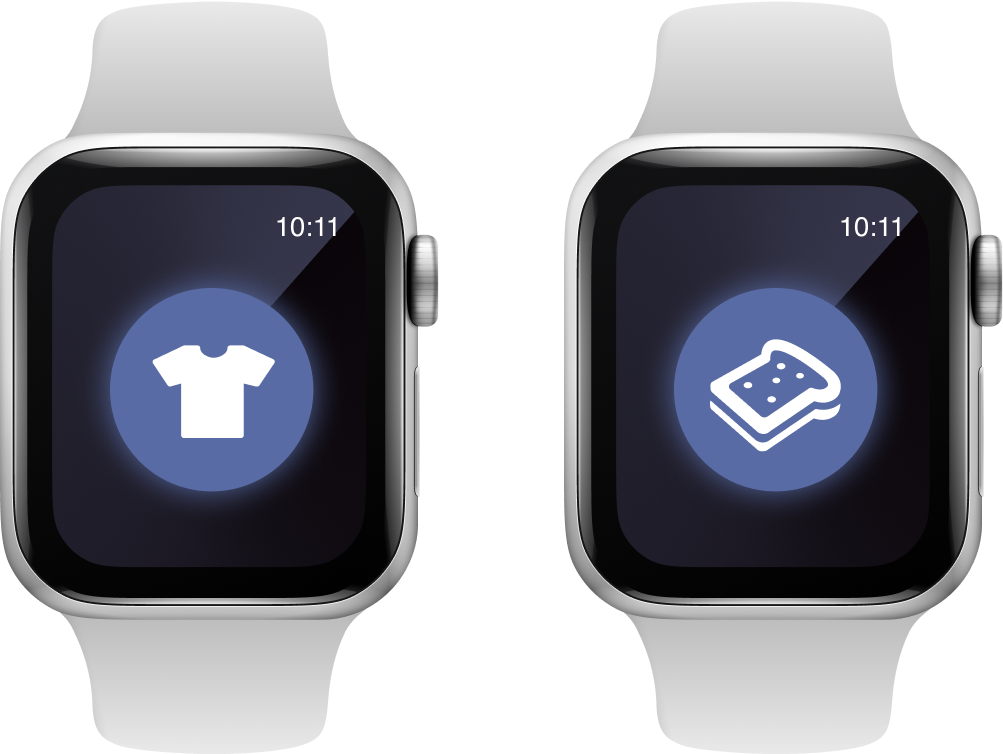 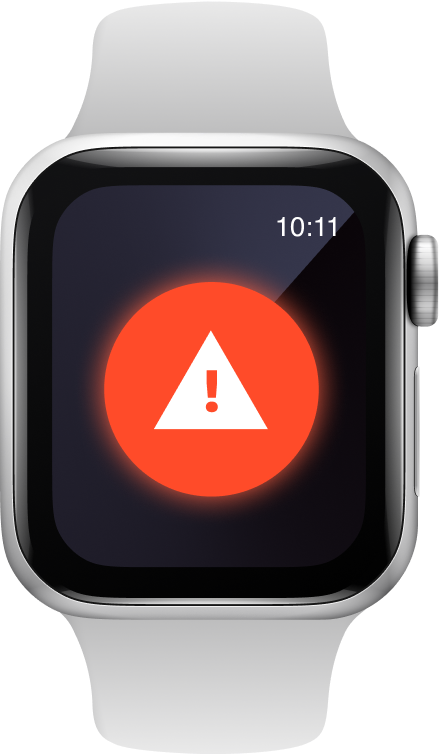 MOBILE APP
The mobile app is meant to be used by the caregiver and has three main functions/features:

Piece of mind for the caregiver
Function 1. Managing Stickers
After the caregiver places stickers that are reminders or safety warnings in the PLWD's home, these reminders can be edited and managed through the mobile app, including seeing their active status, whether the PLWD has interacted with them, and the voice messages attached to them.

Proving support and understanding
Function 2. Question Log
MEMO tracks and creates a database of the PLWD's repeated questions, concerns, and activities — in order to give insight on the PLWD's concerns and progression with Dementia. These insights can give ideas and recommendations for treatment activities for the caregiver, which also leads to MEMO's 3rd function.

Tailored recommendations; a system that gets smarter
Function 3. Past Questions and Memory Logs
By analyzing the content of the question logs, MEMO provides a monthly summary on what the patient was most concerned or curious about. MEMO then gives suggestions for future caregiving.
By analyzing the content of the question and memory logs, MEMO can also recommend places to add MEMO stickers in the future.
NEXT STEPS​​​​​​​

User Testing
Testing with high-fidelity prototypes is needed to better understand how PLWD and their caregivers would feel with the MEMO system we've built, and also to better flesh out interactions within the PLWD's environment (their home.
Flesh out 'Past Questions & Memory Log' Feature
Based on the feedback we received, the ability to receive tailored insights and recommendations about the PLWD and caretaking process was the important and unique selling point of MEMO; the idea that MEMO can adapt and evolve with the PLWD and caregiver as the disease progressed. Therefore, building out this feature and making it more prominent would be ideal.